There has been a farm at Blackerton since at least the early 1800s and Blackerton House appears to be the original farmhouse building. Back then the Blackerton Estate was about 250 acres in size.

In 1819, Blackerton was farmed by a farmer called John Maunder, along with his wife Sarah and three children (they later had four more). Then we can find no further records until 1841 when William and Mary Hill and their four children and four servants occupied the house. In 1851, the house itself seems to have been unoccupied although there was a tenant at Blackerton Cottage, which then formed part of the estate. The estate was advertised for sale in the North Devon Journal in 1857.

In 1861, the Norrish family became the tenants or owners of Blackerton – John & Elizabeth Norrish, their two children and four servants. In 1869, the estate was advertised to let again for a period of 8 or 12 years and described as “fitted for the accommodation of a Gentleman desirous of sporting, and of the occupation of a Farm”.

In 1871, Richard and Emma Tuck and their eight children moved into Blackerton as tenants with the owners named as Beadon. In 1877 there was a fire that was initially reported as Blackerton House burning down (reported by a messenger on horseback on a “sorry steed that fell down in the road and cut both its knees”) but luckily was found to have affected only the roof of Blackerton Cottage.

Blackerton House is part of Blackerton Village, which was formerly a village for people with learning difficulties. Established in the 1960s by the artist, Peter Forbes, it was a thriving community until its closure in 2010. The site was sold in 2011 and we have purchased three of the buildings which are to become the Blackerton Ecocentre. The remainder of the site will become private housing. (Interested in moving here? See current properties for sale at Blackerton). 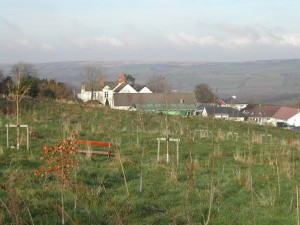